This arrangement of That Moaning Trombone – a comic march one step – has been crafted by Sandy Coffin to recreate the unique style and sounds of the legendary Harlem Hellfighters band, through close listening of their available archive recordings.

Commissioned by John Wallace, this arrangement of That Moaning Trombone has been crafted by Sandy Coffin through close listening of the available recordings of the Harlem Hellfighters Band.  Sandy had been heavily involved with the Historic Brass Society symposium 2017 held in New York and assisted John with his research on this fascinating band and the style of music it generated.

Eye-witness accounts refer to the 369th band ‘dancing’ rather than ‘marching’. Above all, in modern performance, finding a ‘dancing beat’ is crucial to a successful performance of this Ragtime march in order to do justice to the great pioneering work of James Reese Europe.  Note the the reckless abandon with which glissando, at that time a novel effect, is used!

Look and Listen (courtesy of the Tullis Russell Mills Band): 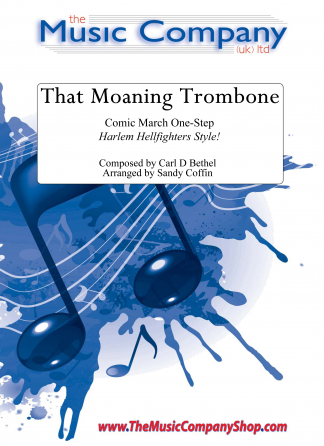 You're viewing: That Moaning Trombone £30.00
Add to basket