Philip Harper has created a wonderful, varied concert item which is full of life and vitality.   The work was commissioned by the Charles Church Camberley Band in memory of solo horn player and life-long member, Libby Godden who lost her fight against cancer in 2011.

Raising Funds for Cancer Research UK.  The Music Company (UK) Ltd has been involved in charitable work for many years.  It continues this support through publishing Cranborne Chase and helping to raise funds for the Cancer Research UK charity, Libby Godden family’s elected charity.  A donation will be made by The Music Company (UK) Ltd for every purchased set of this piece.

Listen In (courtesy of the Charles Church Camberley Band 2011):

Cranborne Chase was commissioned by the Charles Church Camberley Band in 2011 in memory of solo horn player and life-long member Libby Godden.

Libby joined the band in 1966 which marked the start of a long association, during which she progressed to the solo horn position, recruited four family members to play with the band, and had spells on the committee as publicity officer and chairman. Most recently she led the Training Ensemble in her role as Assistant Bandmaster.  Libby continued to be active with the band despite a diagnosis of cancer, which finally claimed her life in February 2011.

The Music: As well as invoking the joyous spirit befitting Libby’s approach to life, there are several musical ideas woven into the score. After a brief introduction, the main theme uses the musical letters of Libby’s surname: G, O(A), D, D, E, N(G), whilst the harmonic progression here is based on that of the slow movement of Edward Gregson’s Partita for Brass Band, one of Libby’s favourite passages of music.

To further imbue the piece with Libby’s persona, the lyrical theme is first introduced as a traditional brass band quartet (two cornets, horn and euphonium), one of her favourite musical genres.

After the first rehearsal of the piece the band members, with the composer’s blessing, decided on the name Cranborne Chase, which is the name of a place in Dorset with which Libby Godden had a great affinity.

A donation will therefore be made by The Music Company (UK) Ltd for every purchased set of this piece. There is a hope that every band in the UK will have Cranborne Chase as part of their library and included in their concert programmes, enabling a significant amount of money to be raised for Cancer Research UK through the enjoyment of music. 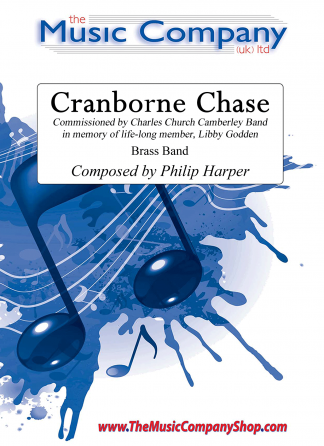