A wonderful piece with three distinct elements, as its title would infer.  From the opening development of Kum Ba Yah with its rich warmth, the tempo gains momentum with references to The Lord’s Prayer, and builds to an exciting, even more positive finish with a wonderful angle on We Are Marching.  The work is a perfect example of the Kenneth Downie’s renowned creativity and stylish handling of melody and harmony.

The work was created in response to a charitable CD fund-raising project, and the recording by The National Youth Band of Wales was featured on the final CD – Into Africa.

As it’s title suggests, this piece consists of three distinct elements, all of which maximise the stylish creativity of Kenneth Downie’s renowned writing talent.

After a rich, warm and hymnal opening ‘movement’ based upon Kum Ba Yah, the work develops and lifts into a fascinating take on ‘The Lord’s Prayer’.  Bringing the piece to an even more positive, up-tempo close is the final section which references the South African traditional song We Are Marching (Siyahamb’ ekukhanyen’ kwenknos’)

Kenneth Downie composed this work in support of a charitable project, known in 2005 as Brass Band Aid.  The organisation called for original compositions to be included in a follow-up CD release – Into Africa to help raise funds for projects in Adet, Africa, and to build awareness of the Make Poverty History campaign.  African Trio was featured on the CD with a recording by The National Youth Band of Wales. 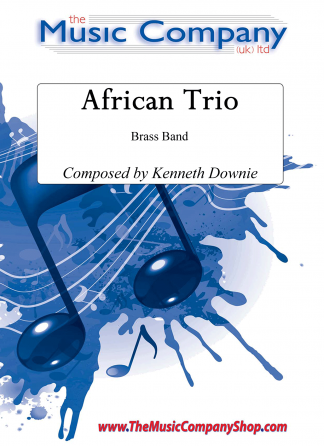